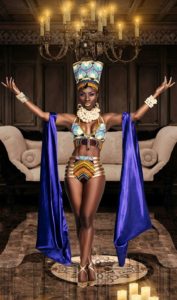 Traci Young-Byron was born and raised in the heart of Liberty City in Miami, Florida. She began dancing at the tender age of three with the Inner City Children’s Touring Dance Company under the direction of Ms. Florene Lithcutt Nichols; her technical training began as a student at South Miami Middle School. Traci decided to pursue her passion for dance at Miami Northwestern Senior High School’s Performing and Visual Arts Center under the direction of Mr. Roderick Davis.

In 1997, Traci Young-Bryon entered The Florida State University (FSU) to pursue a degree in dance.   As a dance major at FSU, she was trained in the area of classical ballet, modern, jazz, hip-hop, Caribbean and choreography.  As a student as FSU, Traci co-charted Mahogany Dance Theatre at Florida A & M University and co-founded Phlava Dance Troop at FSU. In 1998, she was selected to study at the Alvin Ailey Summer Intensive in New York City. In the spring of 2000, Mrs. Young-Bryon was initiated into the prestigious Kappa Epsilon Chapter of Delta Sigma Theta Sorority, Incorporated; she received a bachelor of Fine Arts degree in Dance in 2001.

Her creativity, close contributions and teachings are linked with the African Heritage Cultural Arts Center, Mustangs in Motion Dance Company, Phlava Dance Troop, Mahogany Dance Theater and the Addiction Dance Company experience. In 2002, Mrs. Young-Byron became a member of the “four time most popular dance team in the NBA,” The Miami Heat Dancers. She danced with the Miami Heat for nine years.  During this time she held the positions of team captain and assistant choreographer. Mrs. Young-Byron, also a member and co-choreographer of dance group, Fly Khicks, was selected to represent Miami on season three of MTV’s Americas Best Dance Crew. She has been featured in a plethora of music videos, award shows, concerts and has been blessed to perform internationally. Currently, Mrs. Young-Byron is the founder and artistic director of the Young Contemporary Dance Theatre (YCDT), a diverse and community based dance company, which serves more than 250 inner city children and adults. Through YCDT and PAVAC, she provides performance opportunities, academic development and support, health seminars, master classes, out-of-state conferences/trips, professional photo sessions, makeup tutorials and life coaching.

In 2014-2015, the YCDT, under the direction of Mrs. Young-Byron, were featured on Lifetime’s hit reality TV show, Bring It!  After numerous successful appearances, YCDT and Mrs. Young-Byron were featured in their own eight episode docu-series on Lifetime, STEP IT UP!  Mrs. Young-Byron serves as a positive influence for the Northwestern student body and neighboring community; particularly with the young ladies. Her impact truly goes beyond dance and education; she provides counseling sessions, growth and development and creative communication opportunities for her students and youth.  She is a willing vessel who utilizes her gifts and talents to positively impact her world.

The mission of this organization is to enlighten and expand societal views in all areas of dance. Our duty is to increase the community’s exposure and appreciation for the performing and visual arts through affordable classes, workshops and performances.